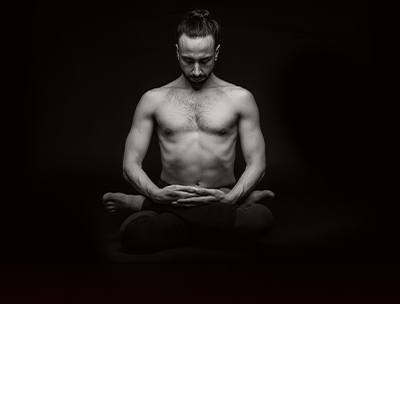 This workshop explores the essentials of Navakaraṇa Sākalya Tantra (Holistic Therapy), starting with a series followed by meditation and body-manipulation techniques (based on participants’ needs and requirements). The series is led with tempo (laya) and melody (svara), chanting in Sanskrit tuned to a sound pitch (nāda) facilitating harmonious flow, rhythmic breathing, concentration and mental clarity.

Both the masterclass and workshop are suitable for all levels.

Dario Calvaruso is the founder and conceiver of Navakaraṇa®. He has been teaching extensively in India, China, Hong Kong, Singapore, Taiwan, South Korea, Mongolia, Indonesia, the Middle East and Europe. Head of the Navakaraṇa Community, he has trained several hundred practitioners and teachers.

Truly a heterogeneous artist since a very young age, Dario left Italy and his family when he was 21 to embark on a journey of self-discovery and study of Yoga and Āyurveda in India that lasted over 15 years. His first destination was Kāśi – The City of Light (Benares, India). During this time, he began the study of Āyurveda with his teacher Paṇḍit Har Govind Miśra. Only later was he initiated into the practice of Tantric techniques of Haṭha Yoga and Kriyā by Pandit Om Prakāśa. On a very auspicious day while having a bath at the Ganges in Benares, Dario met Swami Jñānānanda Bharati, who took him in his āśrama at Gangotri (the source of the Holy River Ganges) to live with Swamijī in the Himalayas at about 4,000m altitude.

Dario learnt Yoga in the most orthodox tradition (guru-śiṣya paraṃparām) – quite a unique experience, especially for a westerner. As advised by his master, Dario started a journey throughout the Indian Subcontinent. He lived with sufis in Pakistan and later with sadhus in monasteries (āśrama-s) of the śiva-siddhānta tradition in Tamil Nadu. During the 5 years he spent in Tamil Nadu, Dario studied and practised Karaṇas (the Art of Movement) and Bharataṇāṭyam (Indian Classical Dance) with Nāṭyācārya Vṛnda Rāmanan (Trichy). At this time, he also studied Yoga Darśana (Yoga philosophy) with Prof. Śrī Rangasvāmi Sourirājan at the Śrīrangam Veda Pāṭha-Śāla (one of the most traditional and highly recognised centres of Vedic Studies). He was also initiated and guided into the study of Sanskrit language by Prof. Śrī Rangasvāmi Tirunārāyaṇan, a well-known Indian scholar. In 2007 Dario started his own yoga āśrama at Srirangam (India), a city-temple and small island in the River Kaveri. Besides running the āśrama, Dario completed a period of academic studies on Yoga, Psychology, Counselling and Philosophy. The Navakaraṇa Method sprouted spontaneously from Dario’s attempt to re-systematise different śāṣtra-s (traditional arts and sciences) into one holistic and comprehensive methodology for self-discovery, healing and transformation.

Share With Friends
New here? You can try a
class before you join a yoga event ►